Did you know? - SOEKS France

Radioactivity
If you were around in 1986 when the accident at Chernobyl took place, you may remember how, according to the French media, the radiation cloud descended through northern Europe but magically stopped at the French border thanks to anti-cyclone activity.
Finally, some 30 years later, the truth has been released and several French documentaries have delved into what really happened across almost the entirety of the European continent in the days that followed the explosion.
Despite many thousands of people dying from various forms of cancer, the public have been kept in the dark as to the true cause.
On April 26th, 2016, the news channel BFM TV confirmed that a sizeable portion of Eastern France is still contaminated with Caesium 137. And the same day, RMC Découverte ran a documentary entitled "Tchernobyl - Un Mensonge Français" (Chernobyl - A French Lie).
Ever since the Fukushima catastrophe, the media have been similarly silent. In Japan itself, a massive cover-up has been ordained and the government consistently claims everything is fine, there is no danger. There is even a law in place making it illegal for any journalist to report on what is happening with the severely crippled and leaking plant at Fukushima Daichi. Up to 10 years in prison is on the menu for anyone caught whistleblowing! And yet, the whole planet is being affected by the daily spill of 3000 tons of radioactivity into the Pacific Ocean. This information is easy to locate as long as you don't look for it on your television or in your daily newspaper.
Consider that Fukushima and its neighboring provinces have not stopped growing fruit and vegetables. After all, a man cannot change his trade from one day to the next. Besides which, the government has given them the green light to sell their produce as well as seafood on the open market. The Japanese people know it has been contaminated and consequently will not buy it. So, who IS buying it, and WHY?
We cannot tell you who the buyer is but anyone buying what are effectively toxically tainted foodstuffs can only be doing it for one motive: PROFIT!
As the source is known to be unfit for human consumption the buyer must be able to purchase the produce at ridiculously low prices. If he can somehow get it to a market outside of Japan where its true source would never be suspected, the potential profit margin would obviously be quite attractive.
How would an unsuspecting buyer ever know that the colorfully attractive packaging he is so used to placing in his shopping cart is actually masking a deadly payload? The effects of radiation poisoning in low doses take an average of 10 to 40 years to make themselves known. Who will connect the food they ate that long ago with their newly discovered misfortune?

Could these 'unfit for human consumption' products ever make their way onto our supermarket shelves? We would all like to believe it impossible but even if the supermarket chains were 100% honest, how can they be assured that circumstances similar to the 2013 "Horsegate" scandal (the Spanghero affair with Romanian horse meat being labeled as beef in well-known branded frozen food products) could never be repeated? In Britain, the press have already warned the public about radioactive food entering supermarkets with false labeling in regard to the original source.
Is everything purchased by your local store tested for radioactivity before it goes on the shelves? Why would it be? According to the media we have nothing to worry about. That's why they stopped reporting on it. And even if it was tested, time restraints would prevent them from testing every single item received.
We are reminded of an old joke in which a few school children would visit a farmer's field each night and steal a couple of melons. Each day the farmer would notice his crop was getting smaller so he took action. The next time the children arrived to steal melons they were confronted with a large sign that warned "One of these melons has been poisoned." Guess how many they stole that night!
The problem with radioactivity is that like a deadly virus it is totally INVISIBLE. Human beings tend to believe they are safe when they cannot physically see anything that may present them with danger. For example, 100's of people have been killed by the Ebola virus. Would you get on a bus if you knew that one of the passengers was infected with Ebola? Of course you wouldn't! But would you get on that bus if you did not know?
The SOEKS dosimeter/Geiger counters cannot save you if you have been contaminated but they can render any such radiation VISIBLE so that you can make an informed buying decision. All you need to do is hold the device over the packaging of the food product and run a test. We hope that it will always tell you the contents are safe but if it tells you they aren't, just put them back on the shelf and move on.
A False Sense of Security
Unless you live in an area that is not too distant from a nuclear power plant, it is highly probable you will usually encounter a safe reading when running your tests. That's really good news! However, this could lead to you thinking you will always be safe and hence become lax about testing. Letting your guard down can be an invitation for trouble. We suggest you do not allow yourself to fall into this trap.
Oh So Safe in France !
When the Fukushima Daichi nuclear plant exploded in March 2011, sales of Geiger counters in France increased by over 3,700% overnight. The French population literally panicked over an event on the other side of the planet !

That's quite amazing when you consider that France has the highest concentration of nuclear reactors in the world. In the event of a minor accident at any one of these reactors, people up to a 50 km radius are at risk. Looking at the concentration of nuclear reactors on the map would indicate that over 60% of the country's population are in direct line of fire should anything happen.

Enormous investment has been made in these nuclear reactors so it is understandable that the industry does everything it can to protect itself. Talk of accidents in the media is extremely rare which gives the French and German public the impression all is well and they have nothing to be concerned about. But the negative experiences of Chernobyl and Fukushima have awoken many people to the point that they demand alternative, sustainable sources of energy and have formed associations such as Sortir du Nucléaire. This French site is just one of several reporting regularly on incidents taking place at the country's reactors.
In France, 25 million people live within 50 km of a nuclear power plant. Click on the map below to better understand the potential threats that may exist in your local environment. 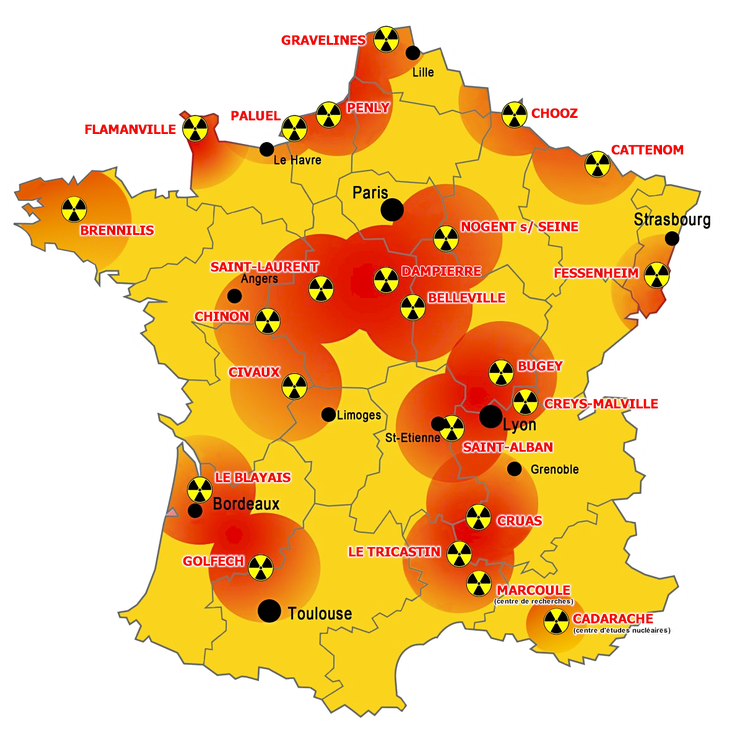